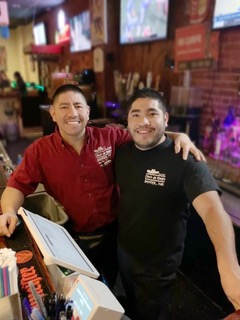 In 1999, Crescencio immigrated to Tallahassee, Florida from a small rancho in Northern Mexico on the outskirts of the beautiful city of Saltillo. In 2005, Miguel Alberto joined Crescencio in Tallahassee and the brothers soon discovered their love of the restaurant industry. It was also there that Crescencio met his wife Erin, a New Hampshire native, while she was studying at the Florida State University.

In 2007, Erin and Crescencio made plans to return to her home state to raise their growing family. At the last minute, Miguel joined them on their journey; a leap of faith eventually leading him to meet his wife, Asia.

After arriving in NH, the brothers worked for several years at Mexican restaurants in the area. The brothers finally made the decision to pursue their long-time dream of starting their own business and on December 13, 2014, Cinco de Mayo Bar & Grill opened its doors in historic downtown Dover. Just over five years later, they expanded their business and opened Cinco’s Cantina in Epping.

When you visit our restaurants, you’ll often find Miguel entertaining customers and mixing drinks behind the bar, while Crescencio greets patrons and serves tables with ease and efficiency. Erin and Asia together manage administrative and marketing relations for the two restaurants. Often times, you'll find the next generation of Tellez restauranteurs greeting you at the door or delivering chips and salsa to your table. Grab a chip, say hello, and welcome to our family!